Dancing with Charities – The New Fred and Ginger of Northampton! 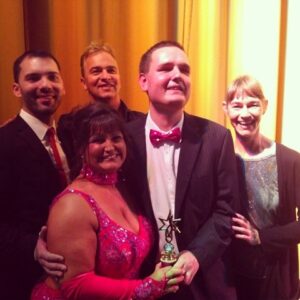 As you know, we competed in the Northampton Asda Dancing with Charities, dancing with 10 other couples all of us raising funds for our causes.

My partner Hugh Spence is an amazing mover and doesn’t let a little thing like being blind stop him from strutting his stuff. My biggest challenge initially was learning to do as I am told…. Yes unbelievably I did manage to take direction, suggestions and the occasional scolding from Doris. Thank you Doris x.

The night was amazing, bright lights, the pinkest dress you have ever seen and a fantastic atmosphere from the audience who came along to support us all.

Hugh was on form and we nailed the first dance, the American Smooth Waltz, my personal favourite, scoring straight 10’s from the judges. Then came the Cha Cha Cha Cha Cha (how do you stop saying this?) Hugh’s favourite dance, we got three 10’s and a 9! Putting us through to the final.
We were delighted to make it to the final with four other couples. It was a tough competition as everyone danced beautifully and had worked so hard on their routines. I would not have liked to be in the judging seat!

This was it, our big moment, we danced the American Smooth Waltz again, both Hugh was very pleased with our performance, I was just happy I stayed in my dress!

Once we had all danced our socks off, the judges called all remaining five partners to the front of the stage… talk about tense! There was a drum roll and I swear my heart was beating faster! Then a fanfare sounded and the winner was announced… US! Yey!
The feeling is indescribable, you should have seen Hugh’s face!

Needless to say we celebrated hard and I don’t think I have come down from cloud 9 since!
A very big thank you to everyone who supported us, donated, all the other competing partners, our teachers, Doris and Gabriel and Asda for making it all happen and allowing us to have the time of our lives!

We use cookies on our website to give you the most relevant experience by remembering your preferences and repeat visits. By clicking “Accept”, you consent to the use of ALL the cookies.
Cookie settingsACCEPT
Manage consent

This website uses cookies to improve your experience while you navigate through the website. Out of these, the cookies that are categorized as necessary are stored on your browser as they are essential for the working of basic functionalities of the website. We also use third-party cookies that help us analyze and understand how you use this website. These cookies will be stored in your browser only with your consent. You also have the option to opt-out of these cookies. But opting out of some of these cookies may affect your browsing experience.
Necessary Always Enabled

Any cookies that may not be particularly necessary for the website to function and is used specifically to collect user personal data via analytics, ads, other embedded contents are termed as non-necessary cookies. It is mandatory to procure user consent prior to running these cookies on your website.